In the following two paragraphs,choose the most suitable word for each gap and fill in the gaps.

The words used in the above two paragraphs all have the same principle meaning —to know. However, it is insufficient to just answer what the word means;instead, you must ask yourself what feelings or image (that is, what connotation?) do we want the reader to have?

Here in the online thesaurus, you can see a plethora of alternatives for the word “know”. All these words are similar,and the thesaurus gives little information about the connotation of each alternative. 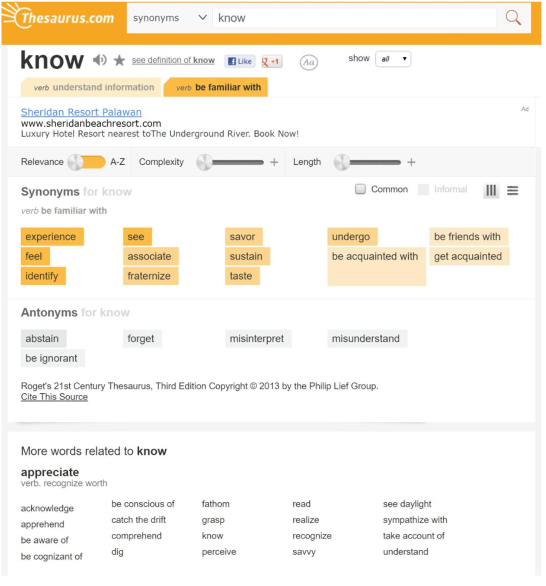 Fill in the following table with either ‘Strong’, ‘Weak’, or just leave blank depending on the connotation you feel the word gives. An example is given for the word ‘know’. 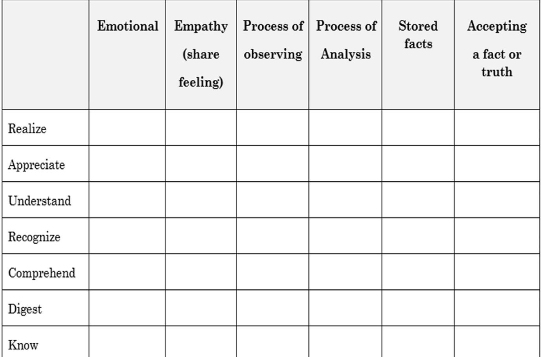 Compare your answers to the table below: 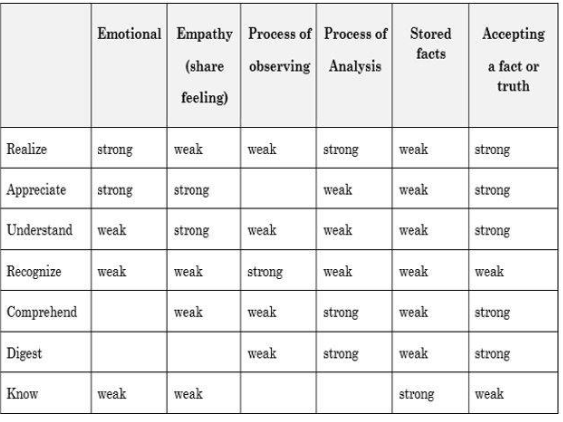 Answers and explanations provided by a NSE for the first paragraph:

“I began to recognize similar patterns in the way these short stories all develop. As soon as I began to comprehend the underlying message the author is trying to convey, I realize they are not the happy story I originally thought they were.”

Recognize –The identification of a factor truth through the process of observing. The reader identified the fact (pattern) through the process of reading and observation. It is simply a statement of the fact identification with no personal emotion or opinion expressed. It isn’t suitable to say: “I began to realize similar patterns in the way these short stories all develop.” because ‘realize’ would indicate a sense of emotion, which is lacking in this context.

Realize –The moment of understanding and accepting factor truth after a process of analysis. In this context there is a strong sense of emotion (likely an element of surprise) that happened at a short moment in time (the moment of the reader becoming aware of and accepting the fact that differs to his or her original belief). If the sentence said “…, I recognize they are not the happy story I originally thought they were.”, even though the meaning of coming to understand the fact remains in this case, the person sounds very cold and almost doesn’t care much about the story.

Comprehend -Process of analysis that generated a genuine understanding of a factor truth. In this context, comprehend is much like understand, but it involves the analysis process (reading the stories and thinking about the author’s message) and a much deeper level of understanding (underlying message).

Answers and explanations provided by a NSE for the second paragraph:

“I know the procedure is not straightforward. I understand what you are saying, that the decision is ultimately not made by you but really appreciate you taking time to listen to my side of the story; I hope you will take a few minutes to digest everything I just said and consider my argument.”

Know -A strong fact that the subject is clearly aware of. This doesn’t tend to involve emotion nor involve a deeper insight as ‘understand’ does. For example, “I know the John McMillan you’re talking about”(John is either the person’s friend or simply someone who the person is aware of). On the other hand,“I understand John McMillan’s thinking”. This is not about knowing John on a personal level, but having insight knowledge of how this person’s logic or expressed feeling.

Understand -Accepting a truth or fact with empathy shown to the counterpart. In additional to the difference shown in the above example, ‘understand’ in this context also entails an element of empathy. The person is already acknowledging their knowing the fact, but follow on with another similar word ‘understand’, and the reason is to stress that even though their opinions differ, he or she has considered the opposite viewpoint, with the hope to also make the other person share the same kind of empathy in return.

Appreciate -The outward expression of an emotion that shows empathy to the counterpart. The difference between ‘appreciate’ and ‘understand’ is that the former involves much more of the speaker’s personal feeling. The purpose of using this word is also to express gratitude, which means being thankful for the other persona’s action.

Digest –Information processing through analysis and observation to generate one’s own truth or fact.

From this comprehensive example, you can see the native speaker has deep knowledge of the connotations of similar words. The NSE has this deep knowledge usually without knowing and has developed it from a lifetime of experience of hearing and reading in real life situations. Further, very few reference books or websites fully articulate connotations. The main reason is that such a book would be thousands of pages long. Nevertheless, the keen author can gain much useful knowledge to commonly used words in academic writing, and their connotations, through careful and focused study.