Fill in the following table with either ‘Strong’, ‘Weak’, or just leave the cell blank depending on the connotation you feel the word gives. 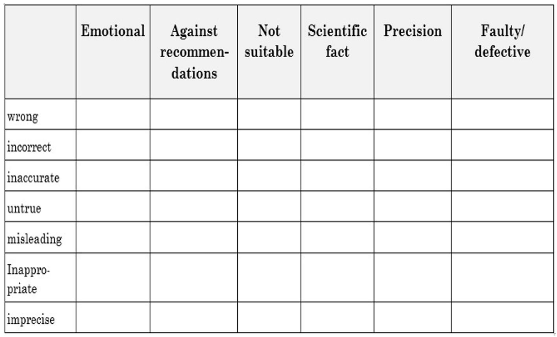 Compare your answers to the table below, which is completed by a native speaker of English: 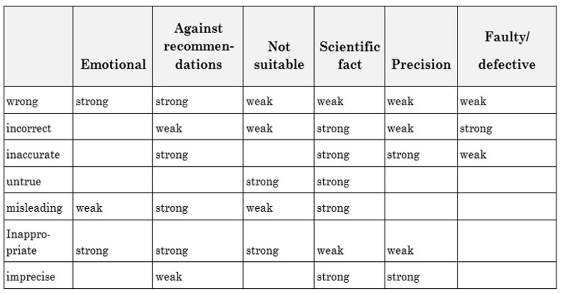 In the following paragraph, choose the most suitable word for each gap and fill in the gaps. Similar words for this paragraph: untrue, wrong, misleading.

“The over-simplified statement you made in the article is untrue, it paints a rather misleading representation of the situation. I think it is wrong of you to publish this statement in an article without any further evidence and support”.

Untrue–Here the writer uses ‘untrue’ to emphasize that the over-simplified statement is not scientific fact and also not suitable (because the writer continues on to say what is suitable). Some novice users of English might choose ‘wrong’ for this situation. This would give the connotation that the write has a feeling of opposition to other writers using oversimplifications.

Misleading-Giving the wrong idea that will like result in undesirable outcome or one that does not conform to standard.The word ‘misleading’ often involves someone’s interpretation of a phenomenon or fact, which is then conveyed to others. When the word‘misleading’ is used, usually another better explanation or recommendation is offered.

Wrong-This often involves subjectivity, emotion, and is often used with ‘think’. ‘Wrong’ is usually a judgmental word. Rather than being used to describe non-conformity to fact, ‘wrong’ is used to stress the deviation from the recommendations, guidelines, ethics or morals.

Similar words for this paragraph:

Answers by a NSE:

“If you measure the amount of gas omitted inaccuratelybecause you don’t follow the method suggested by experts, the collected data may be incorrect.”

Inaccurately-not doing something in recommended way that will likely result in a mistake.In scientific studies,quite often ‘inaccurately’ relates to methods and procedures that have prescribed measurements or sequential order.

Incorrect-an outcome that is not in accordance with a scientific fact or it is defective. There is usually a definitive answer or standard to determine if an outcome is either correct or incorrect. Also, there is a feeling of ‘defective’ because the incorrect data will make the research defective.

Answers by a native English speaker:

“I think it is very inappropriate for a scientist to overlook details and adopt imprecise
calculations.”

Inappropriate–This word choice has the connotations of judgement, which is the emotional component, against recommendations (of scientific theory), and not suitable. ‘Wrong’ could be another choice here but that would emphasis the judgement aspect, giving a different feeling to the sentence.

Imprecise-lacking precision as prescribed by science even though the process may be right. This word is a little similar to ‘inaccurate’, but imprecise means the basic direction is correct (i.e. There is no connotation of correct process not being followed), but the final result was not spot on.