Finally, there are many acronyms and initialisms that might not need to be introduced or defined at all. These are typically terms that are common in everyday language or well known in the field, but they can also be terms that are too difficult to explain or that are not particularly relevant to the paper. Although explanations of these acronyms and initialisms can be neglected, you may still consider explaining them to avoid ambiguity, to make your meaning very clear, or to educate readers who may be unfamiliar with them.

Very commonly used or well-known acronyms and initialisms often do not need to be explained, as many readers will probably already know what they are, or their meanings will be self-explanatory in the context of the discussion. Some examples are DNA, RNA, 2D and 3D, CD, HTML, RAM, ROM, CPU, and GPU – you can see these are often computer components, which, with the growing use of electronics, have become familiar to both researchers and the general public. Thanks to the growing use of 3D televisions and movies, I believe ‘2D’ and ‘3D’ are transitioning into becoming accepted as words: they are still often formally introduced in academic writing, but sometimes they are not, and they are almost never explained in everyday speech. As an editor, I don’t suggest to clients that these terms be explained. On the other hand, ‘TV’, an abbreviation for ‘television’, might be seen as too informal or colloquial (that is, used in ordinary speech) for use in academic writing. Initials for some countries also might not need explanation: USA for the United States of America and PRC for the People’s Republic of China are well known.

Other acronyms that don’t need explanation are anacronyms. Laser, maser, and radar are some of the most common examples of these that you’ll find in academic writing. Because these acronyms and initialisms are now themselves words, they don’t require any introduction or explanation. Nevertheless, a detailed discussion may require the full term to be used in the normal way. For example, one could still say “light amplification by stimulated emission of radiation” even though it’s no longer required to identify a laser.

Acronyms, initialisms, and portmanteaus are often used as names for companies, programs, and projects. As these are treated as the proper names, they do not require explanation in most cases. For example, the company name ‘IBM’ began as an initialism for International Business Machines, while ‘Microsoft’ began as a portmanteau of ‘microcomputer’ and ‘software’, but these original definitions are no longer applicable, so they are also anacronyms. It is acceptable to call them by their official names.

Similarly, names that use backronyms and recursive acronyms also do not require explanation, as the acronym can be thought of as the proper name, not the full name. This includes some software names, project titles, and satellites. These terms often do not need to be explained—indeed, explaining them might be very difficult or not relevant to an academic paper that might touch on them only tangentially. For example, the mathematics software MATLAB is a portmanteau of ‘matrix’ and ‘laboratory’, but it is applicable to much more than matrices, so only the official name ‘MATLAB’ needs to be given. The software library FFTW stands for ‘Fastest Fourier Transform in the West’, based on the saying “fastest gun in the west” from American cowboys, but this name is not useful and it is not necessary to explain this to the reader. It is only necessary to explain that it uses a fast Fourier transform (FFT) algorithm. On the other hand, it can be useful to give the full name to help explain what something is or what it does. For example, it’s not clear what the SIMPLE algorithm is until the full name is given: Semi-Implicit Method for Pressure Linked Equations.

Therefore, some journals have a list of accepted acronyms, initialisms, and other abbreviations that do not need to be explained or introduced in their articles. For example, The Journal of Biological Chemistry (http://www.jbc.org/) has lists of acceptable biological and chemical abbreviations for use in article titles and in the main text of an article (found under Resources for Authors, from the Authors sidebar link). Suppose we wish to discuss ‘gas/liquid chromatography’ or ‘GLC’ in a paper for The Journal of Biological Chemistry. The initialism ‘GLC’ does not appear in the list of accepted abbreviations for article titles, so in the article title we should write “Gas/liquid chromatography in the analysis of…” However, ‘GLC’ does appear in the list of accepted abbreviations for the main text, so throughout the article we can simply write ‘GLC’. Because ‘GLC’ is a standard initialism for this journal, we should not use the initialism ‘GLC’ for another, new term we might invent. If your target journal does not provide such a list, then you may use your own judgement as to what will be well known to the readership or explain all acronyms and initialisms normally, as I’ve explained above. 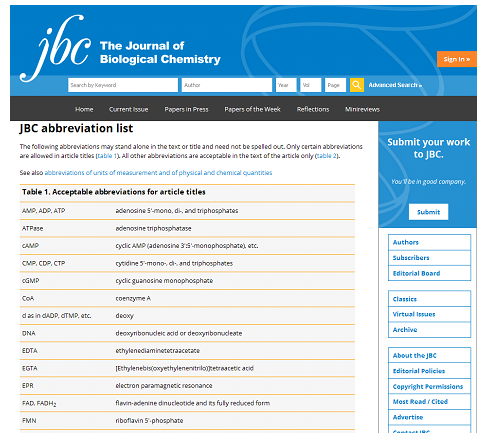 When employing acronyms and initialisms, it is always worthwhile considering the types of people who will read the paper and the journal it is published in, the people who will read a thesis, and the people who attend a conference and read a conference report. An interdisciplinary journal with a wide scope of topics such as Nature has a readership from a wide range of fields, so initialisms specific to acoustics, such as SPL, IL, and ANC, will be completely unknown to readers from other fields. On the other hand, the Journal of the Acoustical Society of America focuses on a range of acoustics-related topics, so common initialisms like SPL (sound pressure level) and IL (insertion loss) will be familiar to readers, and might not need to be explained, but ANC still might not be familiar. Meanwhile, readers of the Noise Control Engineering Journal, which focuses specifically on noise control techniques, will definitely know that ANC stands for ‘active noise control’. Similarly, a conference with a wide scope will receive attendees from many fields, so all acronyms and initialisms will need to be explained, but a conference with a narrow scope will only be attended by experts from a single field, who will likely know what each acronym and initialism means, so these do not need to be explained. Thus, a wide, interdisciplinary readership or audience requires more acronyms and initialisms to be explained, while a readership or audience for a single, narrow field will know acronyms and initialisms from that field, but will not know terms from outside their field. Meanwhile, a thesis will probably only be read by a student’s supervisor, reviewers, and fellow researchers and students, who will all be familiar with the terminology. However, a student will be appraised on their ability to explain topics, which may include use and introduction of acronyms and initialisms, so it would be a good idea to explain these anyway.

I find there are some terms that are typically not explained as a matter of course, because they are commonly known in the field, self-explanatory, or simply too long. In my experience, these are often chemical nomenclature. When presenting an element or chemical, it might be sufficient to give only the symbol, a well-known common name, or a commercial name. For example, when mentioning an element like mercury, the symbol Hg could be sufficient. The chemical sodium hydrogen phosphate is sufficiently defined by its formula Na2HPO4. Very long chemical names like isopropyl β-D-1-thiogalactopyranoside can be written as simply ‘IPTG’ if the full name is not particularly relevant to the research. Regardless, if not giving full names, it is best to ensure it is clear from the context what these are. That is, it should still be clear to the reader that Hg is an element (recognized as mercury) and that IPTG is a chemical and not something else. Meanwhile, in circuit design, the metal–oxide–semiconductor field-effect transistor is a long and complex term so it is often written as simply ‘MOSFET’ and assumed to be familiar to the reader. If a reader wants to know about these terms, they can look them up separately.