A contraction is a word or phrase where a sound has been omitted as a part of everyday speech. The missing sound is indicated by an apostrophe. Contractions are avoided in the formal language used in academic papers, but they come up a lot in common speech and informal writing. I’ll be using them in this chapter (and even this sentence). Many languages use contractions; some common ones in English are:

An abbreviation (the formal term for this specific kind of shortened word is the same as the general term for all kinds of shortened words) is a word where some letters have been removed to reduce its length. A period or full stop is often used to indicate the missing letters. These appear most often in writing, and only sometimes in speech. In academic writing, some common abbreviations are:

Peoples’ names are also abbreviated in this way, such as B. T. McGrath or B. T. M. These letters are known simply as initials, for the initial (first) letters. You’ll often see these in lists of authors and references in academic papers. A shorthand (a system of shortened writing) based on Latin phrases is also most often seen abbreviated (and now very rarely in full):

Another kind of shortened term is a portmanteau (pronounced port-man-toe). In this case, part of one word is joined to part of another to form a new word for something that melds the concepts of both. This can be considered as a deliberate contraction or like an acronym that uses large chunks of the original words. Some examples are: 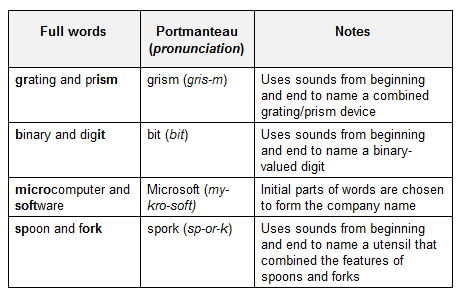 Now we move to the different types of acronym. The first, and one that many people probably think of as an acronym, is called an initialism or alphabetism (there are two names for this, but ‘initialism’ is more common). Naturally, these are not common terms, and you’ll mostly only see them in dictionaries and style guides. These are abbreviations (using the general term again) that are not only made up of the first letters (that is, initials) of the words or important word parts, but also pronounced or read as the letters themselves, not as a word. Indeed, we can’t say them as words without sounding very strange. Let’s look at some examples:

Shortened forms of units of measurement are also often initialisms:

Indeed, many acronyms go on to become words themselves. For example, the process of light amplification by stimulated emission of radiation produced the acronym ‘LASER’, but this became so widespread and familiar that ‘laser’ is now a noun for a device, not for the physical process it utilizes. From it, the verb ‘lase’ was created, so a laser may instead be defined as something that lases. Because they no longer have the meaning they were defined with, these are nicknamed anacronyms, a portmanteau of ‘anachronism’ (meaning something in the wrong time) and ‘acronym’.

Some abbreviations are hybrid acronyms of initialisms and acronyms, where some of the initials are said as letters and others are said like a word. For example

However, whether any given set of initials is classified as an initialism or as an acronym depends on how the writer and the reader expect to pronounce it, both when reading it in their minds and when saying it aloud. One could try to say HTML or CD as words, but the results would sound very unnatural in English and be difficult to say, so these are always initialisms. ‘Laser’ looks very much like it could be a word, so it is an acronym. For IUPAC, one person might say ‘I, U, pack’, but another might say ‘I, U, P, A, C’. Both are reasonable and commonly accepted ways to say it. A person may prefer ‘I, U, pack’ in their mind, but feel ‘I, U, P, A, C’ would be clearer when saying it aloud in conversation or at a conference (after all, these sound like other words, ‘I you pack’, which could be very confusing). It is also common for people to remember what the full term is and say or read that in place of the letters on the page. For example, before CDs were commonly known, it would have been clearer to say ‘compact disc’ instead to ensure the audience understood what was being referred to. In many cases, whether a set of initials is treated as an initialism, an acronym, or a hybrid, depends on trends in the language and in the field. That is, what the majority of people sensibly say will define whether a set of initials is an acronym or an initialism. When speaking aloud, if you’re not certain whether a set of initials should be read out as an initialism or said like a word as an acronym, try reading out the letters first. This will always make the meaning clear to the audience.

There are also some variations on acronyms and initialisms that are worth considering. One is sometimes called a pseudo-acronym (pronounced ‘s-yoo-doe ack-ro-nim’), an initialism that uses letters that sound like the original word or phrase, even if they are not the actual initial letters. Let’s have a look at some:

Another kind of acronym is a reverse acronym, nicknamed the backronym (a portmanteau of ‘backwards’ and ‘acronym’.) This is when an existing word is only imagined to be an acronym, and words are picked to fit the letters, for a joke, a mnemonic (a phrase used to help remember something, pronounced ‘nem-mon-ick’), or a misunderstanding about the origin of the word. These are sometimes used as mnemonics in research and other fields. For example, the Apgar score, which was created by Virginia Apgar to evaluate the health of a baby, was turned into the backronym APGAR as a mnemonic for ‘Appearance, Pulse, Grimace, Activity, Respiration’, which are the five criteria of the score.

Some backronyms are even created to be recursive acronyms, where the full name is defined to include the acronym itself, in an example of recursion (when something refers to, contains, or is defined in terms of itself). These are especially common in computer programming and are mostly intended as jokes or ways of explaining what something is, but can also derive from anacronyms. For example, for the Allegro software library for video game development, ‘Allegro’ was originally an acronym for ‘Atari Low LEvel Game ROutines’. When the library was adapted to platforms other than Atari, the name Atari was no longer valid, so the ‘A’ came to stand for Allegro itself. Thus, ‘Allegro’ is now a recursive acronym for ‘Allegro Low LEvel Game ROutines’, a full name that includes the word ‘Allegro’ in a case of recursion. (The word ‘allegro’ itself comes from the Italian language and is used in music to mean a quick or lively tempo.)

Backronyms help to explain the final kind of acronym found in academic writing and research, sometimes called a contrived acronym (here, ‘contrived’ is an adjective describing that the acronym is made up in a forced or unnatural way). Creation of an acronym can be a back-and-forth process: the initials of the full name may suggest a possible acronym, or even a familiar word, so the full name might be adjusted to better fit a potential acronym. The final product could be considered to be a backronym. For example, a radio telescope currently being completed in China has a 500-meter-wide aperture (although only an effective dish size of 300 meters) and a spherical reflector. Hypothetically, we can call it a five-hundred-meter-aperture spherical-reflector radio telescope. The initials give us ‘FHmASRRT’, which is not very memorable. If we neglect the less-important words ‘hundred’ and ‘meter’, we get ‘FASRRT’. This resembles the English word ‘fast’, if we skip the words ‘reflector’ and ‘radio’ as well. Hence, the telescope is officially called the ‘Five hundred meter Aperture Spherical Telescope’, or ‘FAST’. However, this title neglects the important point that it is a radio telescope, not an optical telescope, and its primary features are its precision, sensitivity, and size, not necessarily its speed as ‘fast’ suggests. (The Chinese name is 天眼 or Tiānyǎn, meaning ‘Heaven’s Eye’, which sounds more poetic in English.) Contrived acronyms like this reach for a memorable or descriptive title, but may lose important information from the expanded name in the process. Some fields like astronomy, satellite design, algorithm and software titles, military and espionage projects, and government agencies are notorious for such contrived acronyms, producing some absurd acronyms and tortuous titles. These acronyms may be silly, but are at least memorable, as you’ll see here: 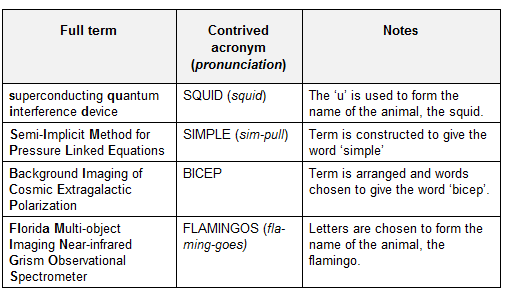 Thus, there is a difference between initialisms and acronyms, based on how they are said. As a result, the title of this chapter might be incorrect: ‘ABC’ is an initialism for the first three letters of the alphabet, not an acronym. However, many people say ‘acronym’ for both kinds, and may not have even heard of ‘initialism’. The word ‘initialism’ didn’t even come into general use until much later. It’s probably only technical editors like me who care for the distinction. In any case, ‘ABC’ has now become a word for the fundamentals of a subject, which is how it is used here. The word ‘alphabet’ itself comes from an initialism, not an acronym, for the first two letters of the Greek alphabet, alpha and beta. Ultimately, there isn’t much of distinction between the two types of abbreviation, and all may be merged as a writer needs. 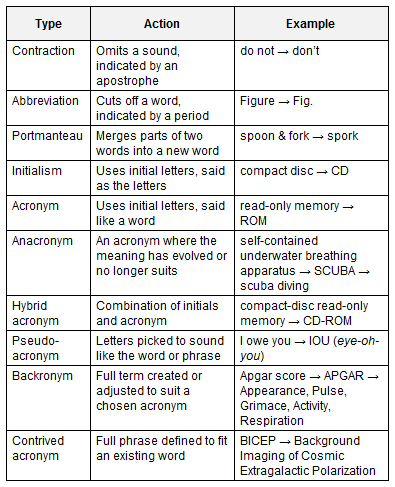