Numbers can make something much easier to understand or very confusing. Always consider what will help your readers follow your argument.

Fix: Choose a number of decimal points (probably three or fewer) for each unit and use these throughout the paper. For example, “The distance is between 2.30 and 5.73 miles”.

Common error: Providing insufficient information on the graph itself and relying on the audience to extract information from the text.

Fix: Ensure axes are labelled, including the unit of measurement and, if necessary the scale (such as thousands or the logarithmic scale). If there are any particular symbols or colors that are meaningful in the graph, you may wish to provide a legend or specify what these mean in the Figure caption.

The below chart is a good example of providing enough consistent information for the reader to understand the figure. Both the horizontal and vertical axes are labelled and specify the unit of measurements. The number of decimal points on the vertical axis is enough to give the reader a good understanding of the figure without being overwhelming. 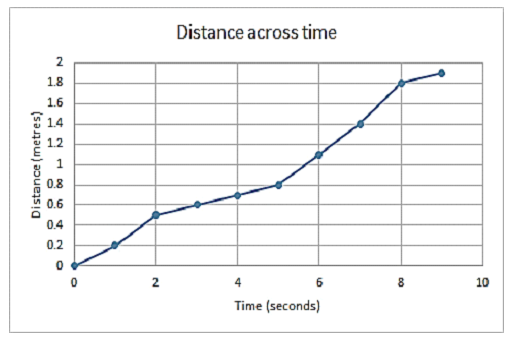 In contrast, the below graph is difficult to interpret for several reasons. The axes are not labelled so it is unclear for the reader which axis is distance and which axis is time. In addition, the axes don’t have units so the reader doesn’t know, for example, if time is measured in seconds, minutes, hours, etc. The intervals on the vertical axis are too close together, making the amount of subdivisions overwhelming. Similarly, there are too many decimal points on the vertical axis. There are very few subdivisions on the horizontal axis. This is not always a problem, but might not be precise enough in some cases. 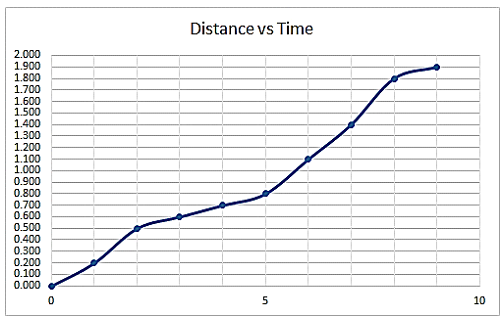 It is easy to make a graph confusing or difficult to read, but it takes skill to produce a clear graph that readers can easily and quickly interpret.

Fix: Provide a scale to limit how many numbers are needed to provide the information. Remember that you can add minor gridlines that are not labelled, but are clear to the reader, for extra granularity if required. If a particular point is very relevant for the text, that point can be labelled with values, even to more detail than provided in the axes.

The axis could be in units of a thousand or a million so that a graph with values to 10,000,000 only needs to go to 10,000 or 10 on the axis.
Advantages: There are fewer digits on the graph, making it easier to read at a glance.

Consider how many decimal points are needed to convey the message of the figure so 0.6000 can be represented as 0.6 or 0.60 on the axis.
Advantages: There are fewer digits on the graph, making it easier to read at a glance.
Disadvantages: There may be some loss of precision. However, graphs in an academic text are usually for visualizing a pattern or relationship, and so the exact values are not always required.

If a scale is used, make sure to include it on the graph itself to support correct interpretation.

Exercise 4 – use numbers for chart axis:

2. If the scale of a graph went from -1 to 1, what intervals for the axis would you use?

1. The answer (c) would be the best approach. Using tens or even thousands would lead to too many numbers listed on the axis, making the graph cluttered. Using fifty thousand would only give three reference points (0, 50 000 and 100 000), which would probably not be enough information for the reader. Thus, using 20 000 would be the best option. To further reduce clutter, you may wish to write the values in units of thousands so that the axis values go from 0 to 20.

2. The answer (b) would be the best approach. Using 0.15 would lead to too many numbers on the axis and it also would not fall out on -1, 0 or 1, which the reader would want to use as reference points. Using 1 would only give you three reference points (-1, 0 and 1) and using 2 would only give you two points (-1 and 1). Both of these options would probably not provide enough information for the reader.